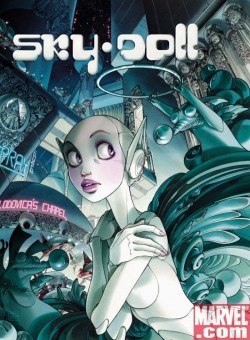 In this story, sky dolls are sentient robots made for a multitude of jobs— mainly for the pleasure of males. Papathea, the planet the story begins in, is entirely dominated by a Theocracy that keeps power by a mix of manipulation of the masses, fake miracles and an iron rule. Oh, and by double standards: women on this planet are mostly oppressed and forced to conform to an impossible ideal of chastity but men are allowed to "sin" without guilt as long as it's with the dolls.

Noa is one of many dolls, working in the "Heavenly Carwash", car washes with some heavy fanservice. Noa is unusual for her kind as she dreams and feels she could do better — most dolls tend to take their virtual slavery situation quite lightly. Roy and Jabu are emissaries of the papacy on the road to Aqua for a peace treaty, who decide to make a quick stop on the carwash. Noa, after making a mess of a situation and deciding that enough is enough, stows away in the guys ship. After being discovered and with the reluctance of Jabu, she joins the expedition and learns more about herself and how messed up the situation on her planet really is.

So far books 1-3 have been released in French, Spanish, Danish, Japanese, Polish and English (the former by Marvel Comics), though Heavy Metal Magazine published all three books in a single issue about a year before the announcement. The fourth issue, Sudra, has finally come out, after about five years of Development Hell. Two volumes of short stories have been published; Space Ship Collection and Lacrima Christi, the first being a prequel about Noa's life before the story began, and the other being a bunch of side stories.