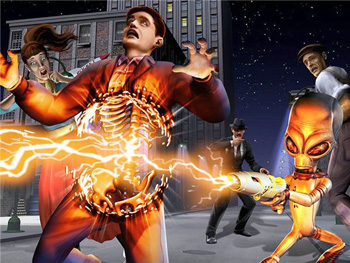 "Being a device that flouts conventional scientific consensus that the molecules composing the human body must be arranged 'just so', and not, for example, across a square-mile radius."
— Manmelter description, Team Fortress 2
Advertisement:

The cleanest variety of Death Ray. Whatever it strikes, be it commoner or king, is reduced to little more than sand and ozone (or simply vanishes in a flash of light). A great way to save money on special effects and not have to litter the place with corpses or blood. Only a few stories will bother to elaborate on where all that matter actually goes, or how the ray gun "knows" to stop disintegrating things once the original target is vaporized (rather than disintegrating everything in the area up to and including the very planet everyone is standing on). And it's even rarer for there to be any acknowledgement that the complete disintegration of an object the size of a human body should in and of itself result in a large release of energy. In other words, it should effectively turn the target's body into a bomb.note (How powerful of a bomb, exactly? Best case, it would result in a steam explosion that would kill anybody nearby and probably cause quite a bit of damage to the building they were in. Worst case, it would result in a blast of gamma radiation 100,000 times more powerful than the Hiroshima bomb. Yes, really)

Be warned, however. If you should fall foul of a Disintegrator Ray, it may take much more than a stay at the Trauma Inn to cure that Status Effect. Even people whose Healing Factor can reconstitute their bodies From a Single Cell may have trouble doing so from a single atom (or less), which makes this a very effective weapon against them. If the shot is somehow shrugged off as not instantly lethal but still hurtful, expect it to hit for massive damage. Usually the more disintegrator rays there are, the less effective each one is. If there are countless Mooks with it, it is likely only moderately powerful. While if there are very few, they will be Instakill Mooks.

This may also make it the weapon most vulnerable to the Inverse Law of Utility and Lethality.

A Sub-Trope of Ray Gun and a Sister Trope of Disintegration Chamber.