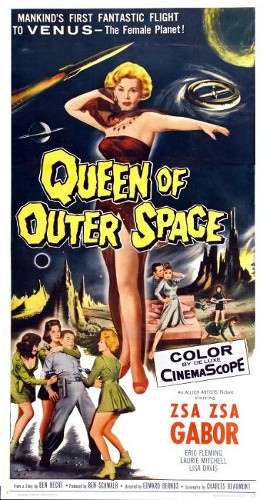 Captain Neal Patterson (Eric Fleming) and his space crew of Lt. Mike Cruze (Dave Willock), Lt. Larry Turner (Patrick Waltz) and Professor Konrad (Paul Birch) leave on a mission to do something pertaining to a space station. Upon arrival however, they witness the station being destroyed by a mysterious ray. They are then caught in the ray themselves, and crash land on Venus. Setting out into the jungle, the four are beset upon by minidress-clad beautiful women armed with rayguns. They are taken to the palace of tyrannical Queen Yllana (Laurie Mitchell), and thrown in prison, where they are given the scoop; in the midst of a nuclear war between Venus and a planet called 'Mordor' (no, really), Yllana led an uprising in which she wrested control of the planet from men and banished said men to Venus's moon (not that Venus has a moon). She believes that the astronauts are spies gathering intelligence for an attack on Venus by Earth, and plans to destroy Earth with the same ray that destroyed the space station. Luckily for the men, it seems that there's a rebel faction, lead by Talleah (who is played by Zsa Zsa Gabor), who long for the return of the company of men and are thus plotting to depose Yllana, and are willing to aid them.

Joi Lansing has an uncredited role as the Earth girlfriend of one of the astronauts.