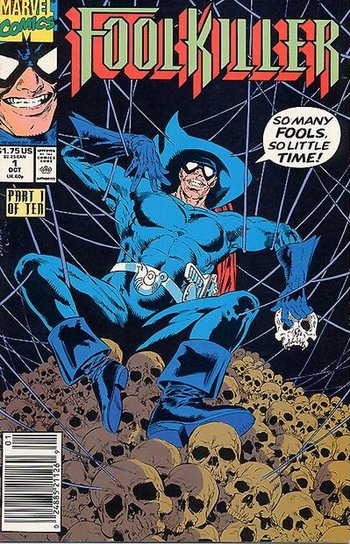 Created by the late Steve Gerber for Marvel Comics, the Foolkiller is clearly an offbeat character in the same vein as Howard the Duck. The only difference is, he's played totally straight. The name is inspired partially by the O. Henry story of the same name and the novel by Helen Eustis, the latter of which was made into a movie starring, appropriately enough, Anthony Perkins. There is also a minor character of this name in L. Frank Baum's "The Enchanted Island of Yew".

The original Foolkiller was introduced in Man-Thing #3 (March, 1974) and killed in the following issue. Several individuals have adopted the mantle of the Foolkiller, such as Ross G. Everbest, Greg Salinger, Kurt Gerhardt, and Mike Trace. Trace's incarnation appears in the Marvel MAX universe. Each incarnation modified the definition of "fool" to fit his mission. Everbest, being a devout Christian, sought out those whom he considered sinners. Salinger, on the other hand, hunted those who he deemed lacked a poetic soul. Gerhardt's razor-sharp definition of fool caused him to target those whom he judged to be guilty of pursuing "momentary gratification" at the expense of others.

The second Foolkiller, Greg Salinger, unexpectedly reappeared in 2016's Marvel NOW! relaunch as a member of Deadpool's "Mercs for Money": a sort of satellite organization of mercenaries and freelancers who ostensibly worked under Deadpool's command. Due to the unexpected popularity of the Mercs for Money spinoff book, Salinger received a solo book in late 2016, by Max Bemis and Dalabor Talajic. It follows Salinger as he attempts to retire his costumed persona in favor of a life as a successful psychologist, but naturally, it doesn't quite take.

A version of Salinger appears as the primary antagonist of the third and final season of Netflix's Jessica Jones, portrayed there by Jeremy Bobb. In the series, Sallinger is a disgruntled, psychotic serial killer who wants Jessica (and all other super-powered people) dead.