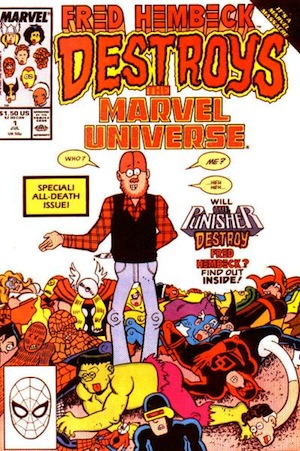 Ever since a fiasco involving an Anyone Can Die Marvel comic book, Fred Hembeck had fallen from grace, and is slumming it up in an alley with nothing but the unpublished comic to keep him warm. Suddenly, he is visited by none other than The Punisher, who has come to determine how guilty Hembeck is for destroying the Marvel Universe. Will Hembeck's reputation be redeemed, or is he doomed to die at the hands of the Punisher?

This comic is notable for its troubles in production

regarding a Framing Device that involved Jim Shooter (which was eventually reduced to Second-Hand Storytelling in the final product).