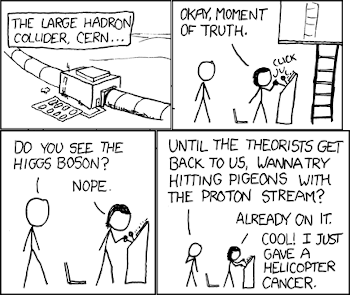 "When charged particles of more than 5 TeV pass through a bubble chamber, they leave a trail of candy."
"OK, so there may be like a dozen ways the LHC can destroy the universe, but seriously, time travel?"
— Cracked, "5 Scientific Experiments Most Likely to End the World"

The newest Phlebotinum du Jour — I Love Nuclear Power for The Noughties/The New '10s/Whatever The Hell This Decade Is Called. Presumably thanks to the massive publicity surrounding the Large Hadron Collider

(LHC), particle accelerators have become the latest science thingy that can do anything. Note that this usually involves visible beams and massive tunnels that people can stand next to or even inside without suffering unpleasantness such as suffocation, freezing, boiling, electrocution or dying of radiation poisoning shortly after.