Tabletop Game / Tales from the Loop 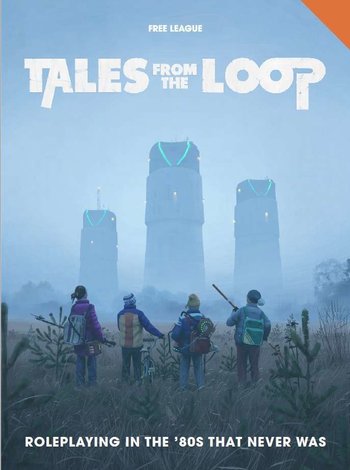 Roleplaying in the '80s That Never Was
Advertisement:

In 1954, the Swedish government ordered the construction of the world’s largest particle accelerator. The facility was complete in 1969, located deep below the pastoral countryside of Mälaröarna. The local population called this marvel of technology, "the Loop".

Acclaimed sci-fi artist Simon Stålenhag’s paintings of Swedish 1980s suburbia, populated by fantastic machines and strange beasts, have spread like wildfire on the Internet. Stålenhag’s portrayal of a childhood against a backdrop of old Volvo cars and coveralls, combined with strange and mystical machines, creates a unique atmosphere that is both instantly recognizable and utterly alien. Now, for the first time, you will get the chance to step into the amazing world of the Loop.

In this game, you play teenagers in the late Eighties, solving Mysteries connected to the Loop. Choose between character Types such as the Bookworm, the Troublemaker, the Popular Kid, and the Weirdo. Everyday Life is full of nagging parents, never-ending homework and classmates bullying and being bullied. The Mysteries let the characters encounter the strange machines and weird creatures that have come to haunt the countryside after the Loop was built. The kids get to escape their everyday problems and be part of something meaningful and magical – but also dangerous.

So reads the publisher description of Tales From The Loop, a Tabletop RPG based on the ominously-nostalgic illustrations of Simon Stålenhag, inspired by Eighties films such as The Goonies and E.T. the Extra-Terrestrial, as well as Stranger Things and Eerie, Indiana. The game focuses on sci-fi mysteries being investigated by groups of children in an alternate 80s town overshadowed by a research facility with a gigantic particle accelerator (in Sweden by default, though the book does give a US alternative along with instructions for setting it anywhere).

The game was funded through a Kickstarter campaign, which got full funding and was able to simultaneously release both English and Swedish translations.

It gained a sequel set in The '90s called Things from the Flood where you play as teenagers after a flood of mysterious dark water.

, though it is said to be based more on Stålenhag’s's book/artwork than anything having to do with RPG. A trailer

was released in March 2020. The page for that can be found here.

A Kickstarter campaign to fund

Tales From the Loop – The Board Game, cooperative board game set in the same universe began in 2020.