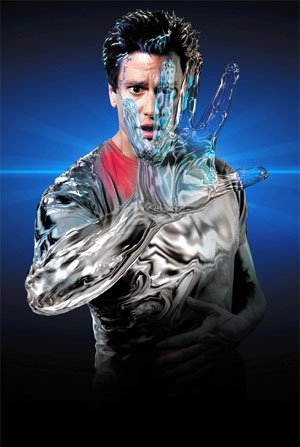 Remember, before you turn invisible, you have to turn into Capri Sun. This is why invisible men go mad.
There once was a story about a man who could turn invisible. I thought it was only a story...until it happened to me. Okay, so here's how it works. There's this stuff called quicksilver that can bend light. Some scientists made it into a synthetic gland, and that's where I came in. See, I was facing life in prison, and they were looking for a human experiment. So, we made a deal. They put the gland in my head, I walk free. The operation was a success, but that's where everything started to go wrong...
— Darien Fawkes, Opening Narration
Advertisement:

In exchange for a pardon, professional thief Darien Fawkes (Vincent Ventresca) agrees to let his brother Kevin (David Burke) use him as a test subject for a synthetic gland that allows him to secrete a light-bending substance called "quicksilver" from his skin and turn into an invisible man. However, the gland was sabotaged before the operation by Kevin's right hand man, Arnaud DeFöhn (Joel Bissonnette), forcing the host to receive regular injections of a counteragent, or slip into a deeply unpleasant state of "quicksilver madness".

A terrorist attack on the I-man project facility, led by Arnaud, kills Kevin, and forces Darien to partner with either the group that killed his brother or the mysterious and under-funded "Agency", headed by the manipulative Official (Eddie Jones), for his counteragent shots. He chooses the Agency, and is usually sent on a new mission every episode. Rounding out the cast are Darien's partner Bobby Hobbes (Paul Ben-Victor), an experienced but...quirky agent; the Keeper (Shannon Kenny), an acerbic scientist in charge of keeping Darien sane and cooperative; and Eberts (Michael McAfferty), the Official's faithful bureaucratic aide.