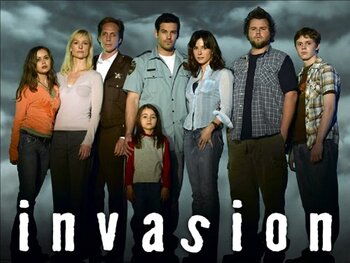 Invasion is a 2005 ABC Science Fiction series set in the small town of Homestead after a devastating hurricane ravages large parts of Florida. However, this hurricane is different from others as it drops thousands of orange 'lights' into the ocean. This event is seen only by the few people brave (or naive) enough to go outside and stand at the coast during the storm.

In the aftermath of the hurricane, people start disappearing, and people thought to be dead suddenly re-emerge.

And there we have an awesome set up for an awesome series. ABC, however, apparently thought differently about that matter and decided to cancel it after just one season, leaving the viewer lost in a sea of loose ends (and it was even ended on a Cliffhanger involving the protagonist's wife). NBC and CBS had two similar programs airing that season, Surface and Threshold respectively; they also wound up gone.