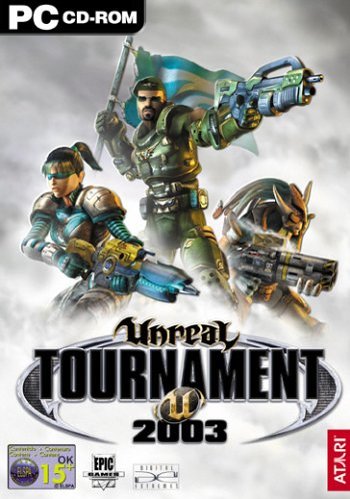 Unreal Tournament 2003 is a multiplayer-based First-Person Shooter videogame developed by Epic Games with help from Digital Extremes and released in September 30, 2002 for the PC, Linux and Mac. It's the third full entry in the Unreal series, preceding Unreal Championship in the series as well as Unreal II: The Awakening on PC.
Advertisement:

The game is a sequel to Unreal Tournament, and an attempt at updating the classic formula for the next generation alongside Championship. You're tasked with building a team to win the Tournament, but it introduces qualifying rounds where you must also take down other hopefuls before your sponsor steps in and gives you the chance of building up a team by picking five individuals. As for the rest, Malcolm, one of the many player characters, broke Xan Kriegor's long tournament streak as champion and dethroned him. Now he's formed a team alongside former rivals Brock and Lauren from the Iron Guard team. It's now up to you and your team to dethrone them. In addition, many new races and combatants are searching for the same objective as you and are also paired with other hopefuls and veterans, including gene-boosted Juggernauts, the Automatons (spiritual successors to the War Machines from Tournament), the Nightmares (a team comprised of experiments and other abominations), the Gen Mo'Kai and the Ancient Egypt-themed Anubans.

While in spirit the game retains the gameplay that made Tournament a huge success, many new features were introduced in this installment and Championship: for starters, every player's moveset has been extended, with players being able to do moves such as double jumps, wall jumps, dodge jumps, wall-dodge jumps and dodge-wall jumps. Lift jumps, which began in Tournament and Unreal as a glitch, now were polished and can give players quite the advantage in the right arenas. As for the weapons, the arsenal was mostly kept intact from Tournament, with a few inclusions (the new starting weapons are the Shield Gunnote A weapon whose alternate fire projects an energy-attack-repellant Shield; replaces the Impact Hammer and the Assault Riflenote A weapon whose alternate fire lobs small grenades; replaces the Enforcer, there's also the Link Gunnote A weapon whose alternate fire allows teammates to boost their power; replaces the Pulse Gun, the Lightning Gunnote a long-range Sniper Rifle weapon which shoots an electrical bolt which deals increased damage if it hits the head; replaces the Sniper Rifle and the Ion Painternote A weapon only present in certain outdoor arenas which act as a coordinate-marker for a satellite which shoots a deadly beam. was added as an extra Superweapon), as well as removals (the aforementioned Impact Hammer and Enforcer, and the Ripper) and changes (the Rocket Launcher can only charge up to three rockets and can't launch them as grenades). And last, but not least, the item roster was reduced to three regular health items, two regular armor items, the Double Damage and Adrenaline pills, the latter of which allow players to unleash a powerful move with a command sequence which gives them either a boost on rate of fire and weapon damage (Berserk), a boost on walking speed (Speed), the ability to become invisible (Invisibility), the ability to regenerate health (Booster), the ability to become a piece of the environment (Camouflage, only with the Epic Bonus Pack) or the ability to get shrunk in size (Pint-Sized, only with the Epic Bonus Pack).

The game contains the following gamemodes:

In addition, the Epic Bonus Pack (see below) adds the following gamemodes:

The many changes introduced weren't enough to satisfy the fans, so later in 2003 Epic and DE began working on a sequel to straighten up things, as well as (re)introducing many missing features the fans may have missed. This sequel is known as Unreal Tournament 2004, the "full" version of the game.