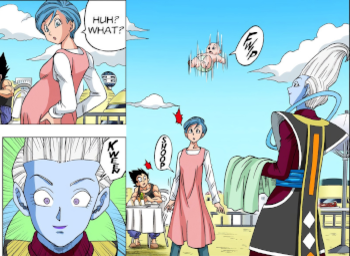 A pregnancy that goes from conception to birth at an extremely fast rate, often caused by an external (possibly supernatural) factor.

In Science Fiction, this is often because of some other hugely advanced race knocks up a different one, possibly a human, and the hybrid offspring gestates at an enormously fast rate, either normal for the other species, and grows to term in a matter of days. Or, if it's created like a robot, the creation is sudden and wasn't announced in previous episodes, and the whole process takes a very short time.

Pregnancy Does Not Work That Way, obviously. This is sometimes just when Writers Cannot Do Math or they are using Comic-Book Time or Webcomic Time and lose track of what the hell is supposed to be happening.

Tends to go hand in hand with Fetus Terrible. Contrast with Longest Pregnancy Ever. Not to be confused with Instant Birth: Just Add Labor!, which is where the woman's pregnancy takes the usual forty weeks but her labor and (especially) delivery are implausibly quick. Also, please do not confuse this with Instant Home Delivery, which has nothing to do with birth.

Whis magically delivers Bulma's baby Bulla to get Vegeta to fight in the tournament.

Whis magically delivers Bulma's baby Bulla to get Vegeta to fight in the tournament.