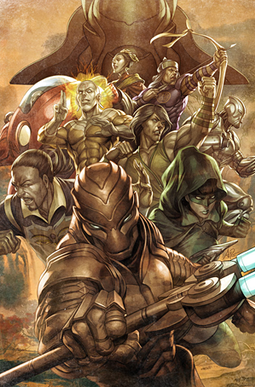 The Great Ten, (Shi Hao Xia/十豪侠) are a team of Chinese comic book superheroes in the The DCU, who are sponsored by the government of the People's Republic of China. The team was introduced in 52 #6 (June 2006), and were created by Grant Morrison, J. G. Jones, and Joe Bennett. Several of the characters have a basis in Chinese Mythology. Unlike conventional superhero monikers, their names are close to literal translations from the Chinese language.

Great Ten is also the title of a nine issue mini-series focusing on the team published in 2010, it was originally planned to be a ten issue title but was cut short due to low sales.