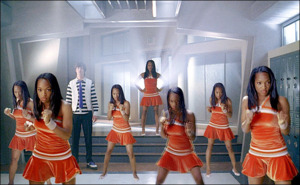 If her name is Penny, does that make them Dimes?
Java: What the hell are you gonna do to me without your army?
Danton Black: [replicates himself] I am an army.
— The Flash (2014), "Fastest Man Alive"
Advertisement:

The ability to make several copies of oneself, normally maintaining control over all copies. Usually comes implicitly with the ability to recombine said copies.

This power can be very potent. One can be effectively immortal if at least one of you survives, one gets the ability to distract, surround or hinder your opponent and if all the duplicates work from a single mind it all occurs with perfect coordination. This power is an opportunity for writers to show off the creative combat techniques and imaginative Mundane Utilities.

There may or may not be some idea of a central self, one copy who is the "proper" version for whatever reason: you have to kill that one to kill them all at once, one gives all of the commands, etc. The other copies, conversely, rarely count as persons in and of themselves; see also Cloning Blues. If they are counted as actual people, expect Which Me?.

Possible side-effects include Literal Split Personality. May be used in a Doppelgänger Attack, a Breather Episode might go for Me's a Crowd. Not to be confused with I Am Legion. Power Perversion Potential means this naturally leads to Screw Yourself.

Moon is a young INVISO agent of M.A.T.A. Academy. She can make holographic projections of herself which appear as clones. This is how she introduces herself.

Moon is a young INVISO agent of M.A.T.A. Academy. She can make holographic projections of herself which appear as clones. This is how she introduces herself.