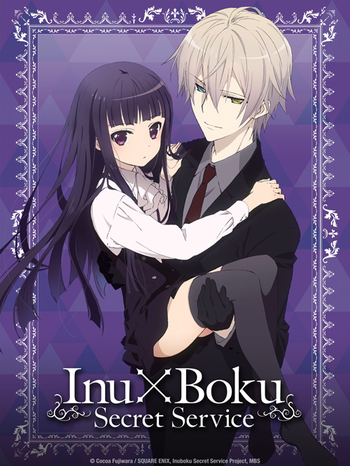 Shirakiin Ririchiyo... and her dog.
Advertisement:

Ririchiyo Shirakiin, scion of an influential family, has an issue — she has No Social Skills. She resolves to get rid of this by moving out and living on her own in the "Maison de Ayakashi" (or Ayakashi Hall), a mansion housing Uneven Hybrids who pass a very strict examination, each resident coming with his/her own Secret Service (SS) agent, also an Uneven Hybrid. Ririchiyo refused to have an SS accompany her, but eventually finds out that her assigned SS—Soushi Miketsukami—was a fox spirit she helped as a child. Now, whether she likes it or not, she has to start living with the protective Soushi and her fellow tenants and their SS Agents.

Inu × Boku SS (妖狐×僕SS, Inu Boku Secret Service, Dog and I Secret Service) is a Japanese manga series written and illustrated by Cocoa Fujiwara, which ran in Gangan Joker from 2009 to 2014. It was adapted into an anime television series by David Production with its music composed by Kotaro Nakagawa for the Winter 2012 Anime season, which covered approximately the first 3 volumes of the manga. The anime has been licensed by Sentai Filmworks for streaming on Crunchyroll.com, and home video release in North America.

The forum thread can be found here

Note: All examples that are found after the end of the anime and in the manga only should be spoiler-tagged.