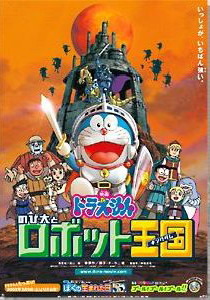 The 23rd installment of the Doraemon films. The story starts when Nobita is once again jealous of Suneo's new toy, this time a robotic dog. After a quite big fight with his mom and Doraemon, Nobita decides to use the spare pocket to buy some robots from the future.. with a disastrous result. At the same time, the purchased robots clash with a young robot boy in the Time Tunnel and bring him along to the 21th century. The boy, named Poko, rescued the gang from Suneo's malfunctioned robot before suffers damage. Since the damage cannot be repaired by the 22th century technology, the gang must travel to the Robot Planet to find someone who can repair him, while fighting against the tyrannical Queen Jeanne of the kingdom who seeks to remove all the robots' emotions.