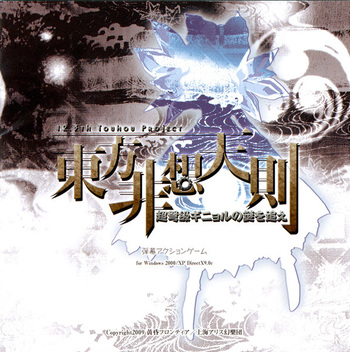 ~ Choudokyuu Ginyoru no Nazo o Oe (usually referred to by fans as "Soku") is a video game created by Team Shanghai Alice and Twilight Frontier for Windows computers in 2009. It's the 12.3th videogame installment in the Touhou Project franchise.

A giant humanoid figure has been sighted wandering around Gensokyo, and three of its "weaker" inhabitants set out to find it. Sanae thinks it must be a Humongous Mecha, Cirno the legendary youkai Daidarabotchi, and Meiling the disaster god Taisui Xingjun.

A short Sequel to the Fighting Game Touhou Hisouten ~ Scarlet Weather Rhapsody, Hisoutensoku is playable as a standalone game, but it can also function as an Expansion Pack for its predecessor - adding Sanae, Cirno, Meiling, Utsuho and Suwako as playable characters, plus new and rebalanced mechanics for the veteran cast. More detailed gameplay information can be found on the wiki