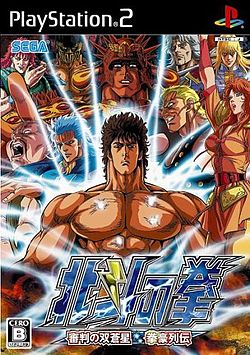 The time of retribution...
Where Hokuto appears, chaos follows...
Advertisement:

A Fighting Game based on Buronson and Tetsuo Hara's classic Fist of the North Star manga developed by Arc System Works and published by Sega. It was originally released for the arcades, running on the Atomiswave hardware, in 2005 and was subsequently ported to the PlayStation 2 exclusively in Japan in 2008 as Hokuto no Ken: Shinpan Sōsōsei: Kengō Retsuden (which roughly translates Fist of the North Star: Twin Blue Stars of Judgement: History of Great Fighters), the added subtitle being the result of prior Hokuto no Ken video games. While not the first Fist of the North Star fighting game, nor even the first arcade game based on the franchise.

It plays similarly to other ASW fighting games, but with its own mechanics: "Boost" which moves your character forward quickly while also being able to cancel attacks in others, and the game's main attraction: Fatal KOs. Under everyone's life bar is a gauge shaped like the Big Dipper. Most special attacks, as well as a stun move (Low Punch and Low Kick) will take away a star and when one character's entire star gauge is empty, the Star of Death will show up nearby it, meaning they can be killed off with a Fatal KO which just like Instant Kills and Astral Heats, ends the match right there.

Reaction to the game was quite mixed. Fans of the manga and anime loved it for its attention to source detail and great music and fast gameplay while fighting game connoisseurs tend to be more critical of the game its small cast (of only 10, 11 if you count Raoh's "Ken-Oh" final boss form,) lack of balance, huge amount of infinites and lack of console exclusive extras aside from being able to play as Raoh's "Ken-oh" form.

The Time of Retribution! Battle 1! DECIDE THE DESTINY!