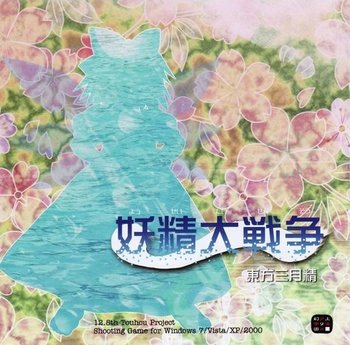 Yousei Daisensounote "The Great Fairy War" ~ Touhou Sangetsusei (more commonly known as "Fairy Wars") is a video game created by Team Shanghai Alice for Windows computers in 2010. It's the 12.8th videogame installment in the Touhou Project franchise, and a spinoff of the Touhou Sangetsusei manga series.

Cirno's house got destroyed by the Three Fairies of Light, and since Cirno took it as a declaration of war, she's going to punish them.

The game features the freezing mechanic. Cirno can freeze bullets that come into contact with ice used by her, and frozen bullets that touch other bullets will freeze them too. The bomb system has also been revamped into the Perfect Freeze mechanic, allowing all bullets on the screen to be frozen.