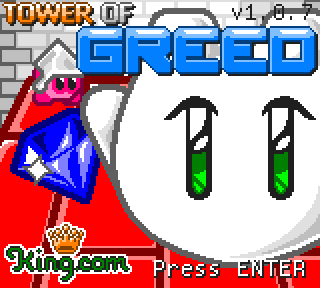 Tower of Greed is an Adobe Flash video game by Epic Shadow released in 2009. You play as an odd white thing with green eyes and have to climb the titular tower without falling down. Every floor has plenty of gems to collect which make up your score, but losing makes you lose all of them. There are also 64 trophies to collect, but again, you don't keep them when you lose. Every 5 floors, there is a door which lets you escape with them. There are also 3 enemy types that push you back upon collision, 4 power-ups to help with collecting/getting as high as possible, and several other things.