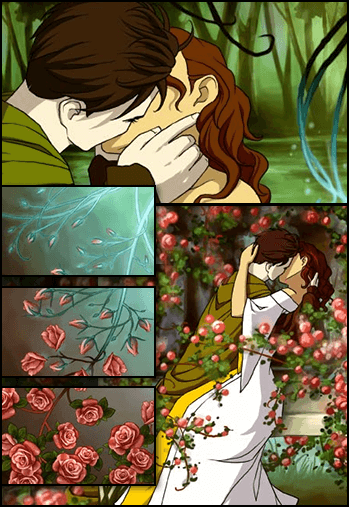 The moon had been rising late, but the stars touched the snow with a fairy light, and all the world seemed somehow bathed in a gentle blue-white glow. It was, of all nights, among the closest to perfect Garion had ever seen, and all of nature seemed to be holding its breath.
— The Belgariad: The Seeress of Kell
Advertisement:

If a character needs to look pensive and tragic, there will be a hair-whipping wind... even inside. If there's an important funeral being held, there will be rain, or at least the dimming of the sun. If characters are feeling blue, we often see them exposed to Gray Rain of Depression. The Mother of All expresses her sympathy for the strife of an epic battle with violent thunderstorms, chasms spontaneously opening in the earth — even horrifying holes ripping the very fabric of reality!

And, when it's all over, the Empathic Environment responds with calm. The air stills and the clouds part...at the same time. The sun shines down as the people turn their faces up, and the rain stops just as the tears of joy start to flow. On a larger scale, the ill character's case often worsens in the autumn as the leaves start to fall, and spring brings about courtship not only among birds but among humans.

Almost always this phenomenon is caused by The Law of Conservation of Detail. After all, if the scene you're describing (or showing) doesn't fit the mood of the moment, why do you describe it in first place?

When done linguistically, this is known in literary criticism as the pathetic fallacy, and is well-explained by this strip

Supertrope to Cue the Sun, Dramatic Wind and Grave Clouds.

See also Fisher King, which is when the environment reacts to the mood of a specific person, and Fisher Kingdom, which is when the people change to match the environment, and Environmental Symbolism. For a living, even sapient environment see Genius Loci. Similar to, but not the same as, Weather Saves the Day, in which the weather facilitates the plot of the story; in this trope the weather augments the mood of the story. For weather that responds to holiday celebrations, see Holiday-Appropriate Weather.

Not even the weather is ready for a Dingo disaster.

Not even the weather is ready for a Dingo disaster.