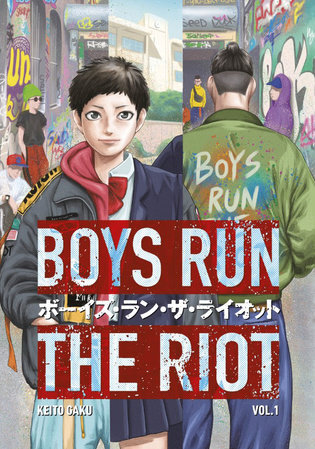 I hate my uniform. It's stiff and annoying... hot in the summer, cold in the winter. But the biggest reason... is that every morning, it reminds me that I'm female.
— Ryo Watari, Chapter 1 "Encounter"
Advertisement:

High schooler Ryo Watari knows he's transgender, but he doesn't have anyone to confide in about the confusion he feels. He can't tell his best friend, who he's secretly got a crush on, and he can't tell his mom, who's constantly asking why Ryo "dresses like a boy." He certainly can't tell Jin Sato, the new transfer student who looks like just another bully... The only time Ryo feels at ease is when he's wearing his favorite clothes. Then, and only then, the world melts away, and he can be his true self. One day, while out shopping, Ryo sees someone he didn't expect: Jin. The kid who looked so tough in class has the same taste in fashion as him! At last, Ryo has someone he can open up to — and the journey ahead might finally give him a way to express himself to the world.

Boys Run the Riot is a manga series by Keito Gaku. It was serialized in Weekly Young Magazine from January 27, 2020, to August 31, only to move to Comic Days on September 9 and end on October 14 with 37 chapters in 4 volumes. Kodansha USA began publishing the manga in English on May 25, 2021.