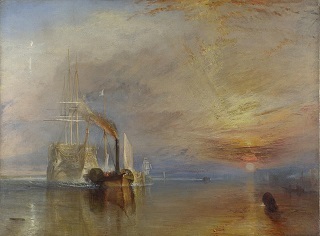 The Fighting Temeraire (in full, The Fighting Temeraire, tugged to her last berth to be broken up, 1838) is an 1838 painting by British artist JMW Turner. It depicts the Napoleonic-period sailing warship HMS Temeraire being towed to the scrapyard by a steam tug, with a dramatic sunset in the background. It was highly popular from the first, and Turner left it to the nation when he died; it is on display at the National Gallery in London.
Advertisement:

The painting combines melancholy symbolism, patriotic references (the Temeraire's wartime honours included the famous and crucial Battle of Trafalgar), and a dazzling, almost abstract sunset. Hence, it's not surprising that its popularity has endured to the modern day; it was voted Britain's favourite by the listeners of a radio programme in 2005, and in 2020, it was reproduced on a banknote honouring Turner. It also shows up in the James Bond movie Skyfall.

Only indirectly related to the historical fantasy novel Temeraire; the dragon in that book is named after the same ship.

Tropes Invoked by the Painting: