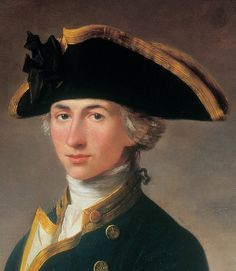 "England expects that every man will do his duty."
— Nelson's signal before engaging the French fleet at Trafalgar
Advertisement:

Vice Admiral Horatio Nelson, 1st Viscount Nelson (29 September 1758 – 21 October 1805), was an officer of the Royal Navy during the Napoleonic Wars and widely considered to be England's greatest admiral. He lead the British fleet to victory at Copenhagen, the Nile, and Trafalgar, cementing his position as one of Britain's great war heroes, to the point where Lord Byron dubbed him "Britannia's God of War." Napoléon Bonaparte himself said of Nelson "That man made me miss my destiny.", after he prevented Napoleon from conquering Africa.

He was killed in action at Trafalgar, shot by a French sharpshooter, but his victory shattered French plans for an invasion of England and left the British with the freedom to strike at French ports at will, along with establishing British naval supremacy for the next century. Trafalgar Square was named in honour of the battle, along with the 170-foot Nelson's Column (which served as the name and logo for Nelson Entertainment, best known for producing the Bill & Ted movies).

Even though he's considered to be the Royal Navy's best admiral, he doesn't have a division named for him at the Royal Naval College, as it's felt it would be unfair to rank one admiral above the rest.