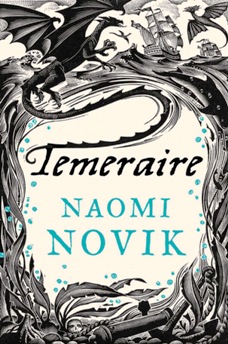 This Alternate History series by Naomi Novik sets out to answer a vital question that has intrigued historians for centuries: What would The Napoleonic Wars have been like if the countries involved fought them with dragons?

The series centers on William Laurence, a Navy captain who takes possession of a French ship transporting a valuable dragon egg home. Unfortunately for Laurence, the egg is very close to hatching when he takes it on board, and an "unharnessed" dragon who doesn't choose a captain within a day of hatching becomes feral and thus useless for anything but breeding stock. He ends up harnessing the baby dragon and naming him Temeraire, after the second HMS ''Temeraire'' (there is also a reference to the first HMS Temeraire which like Temeraire himself was originally captured from the French); the books center on the pair's adventures together.

As well as
Advertisement:
Golden Age and Other Stories (2017) which includes short stories set in the Temeraire universe (for the most part).

The series was remarkable in that, upon reading the manuscript for the first novel, the editor was so excited she asked the author, Naomi Novik, to finish the next two quickly for an unusual push: after three years of writing, the first three novels were released back to back over the course of three months.

Peter Jackson had reportedly optioned the movie rights to the series, and had also been heard to debate airing them as a miniseries instead, to make it harder to be Cut Short (a problem that His Dark Materials, The Inheritance Cycle and even The Chronicles of Narnia fans can speak of from experience). However, in 2016, Novik has said the rights have since reverted to her and there are no plans for an adaptation at this time.