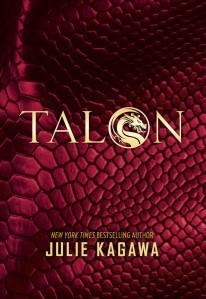 The Talon Saga is a Young Adult book series by Julie Kagawa and revolves around the war between a secret dragon organization masquerading as humans and a religious order who hunts said dragons.

Ember Hill is a young dragon hatchling sent out for a firsthand experience of the human life and prove she can fit in before taking her spot in the secret dragon organization, Talon. Alongside her twin brother Dante she is moved into a town by the ocean and is already looking forward to spending a normal summer, only to discover there's been a change of plans and her training for Talon starts early. Then a series of run-ins with Riley, a rogue dragon the likes of which weren't even supposed to exist, and a surprisingly lovable human boy makes her doubt what the organization told her, and suddenly she's not sure if she wants to stay with Talon at all.

Garret Xavier Sebastian is one of the strongest young soldiers of the dragon-hunting Order of St. George. Upon finding that Talon hid a pair of dragon hatchlings in a town by the ocean, he and his partner are sent to find them and kill them. One of his main suspects is Ember Hill, but the more he observes her the more humanity he sees in her, until he has to wonder if dragons are truly the emotionless monsters the Order has always made them out to be.

The Talon Saga follows Ember, Garret and rogue dragon Riley as they get caught up between the front lines of humans against dragons and uncover secrets that both sides tried to keep from ever coming to light. The series consists of five books: Talon, Rogue, Soldier, Legion, and Inferno.

The Talon Saga contains examples of: