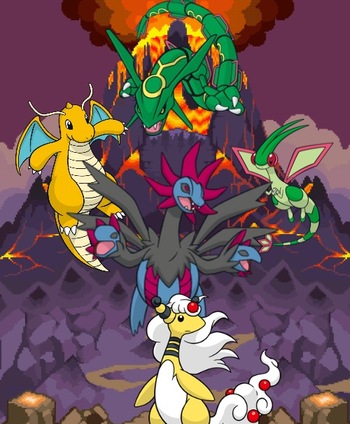 Our Dragons Are Different, often very much so, and sometimes choosing a specific type from all the variety, or discarding all the others, is hard. Some works dodge this issue by including a greater variety of dragons, including many different dragon appearances, characterizations and dispositions within a single work, and define all the different varieties as being distinct and distinctive strains, breeds or species that coexist in the same setting.

There are many different ways to sort types of dragons, and no two works use all the same variants or define them in precisely the same way, but certain kinds tend to turn up more often than others. Many of these originate from the depictions of mythological dragons used in specific historical areas or from unrelated mythical beings, while others are taken from heraldic systems and others still were created more or less from whole cloth in modern fantasy fiction. Some works specifically root these distinctions in the number and kind of the creatures' appendages; this is not universal.

It's also common for more original variants to turn up. These include more or less divergent variants of the above types, less well-established versions of or takes on fantasy dragons, more obscure mythological beings, and simply piques of a creator's fantasy.

Note that this isn't a classification of every different interpretation of dragons — that's what Our Dragons Are Different is for. This refers specifically to when individual works include at least several interpretations of dragons as distinct in-universe breeds.

Subtrope of Our Dragons Are Different. For another type of very varied fantasy creatures sometimes used in this same manner, see Vampire Variety Pack.