Literature / Theirs Not to Reason Why 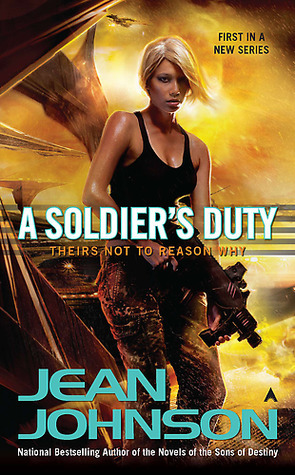 Theirs Not to Reason Why, named for a line from Alfred, Lord Tennyson's poem "The Charge of the Light Brigade", is a Military Science Fiction series by Jean Johnson, consisting of A Soldier's Duty, An Officer's Duty, Hellfire, Hardship, and Damnation, which came out November 25, 2014.
Advertisement:

Ia is a precognitive, who foresees a galaxy-wide cataclysm three centuries in the future. In all the possible futures, only one comes out differently, and Ia must give up every possibility for her own life to make sure that it happens.

She must abandon her dreams of a career as a singer and musician, and join the Space Force, first as a Marine, then into other branches. She disobeys orders and conceals vital information from her own superiors. She literally wades through the blood of friend and foe alike, fighting through a genocidal war that she could have prevented. She leaves her family and homeworld in the centuries-long grip of an oppressive theocracy, all in the service of iron necessity, because if she allows anything else to happen, everything in the galaxy will die, eradicated as though they'd never been. She will sacrifice all that she would or could have been to become the Prophet of a Thousand Years, ensuring that the galaxy and all the sentients in it will have a future of more than three centuries.