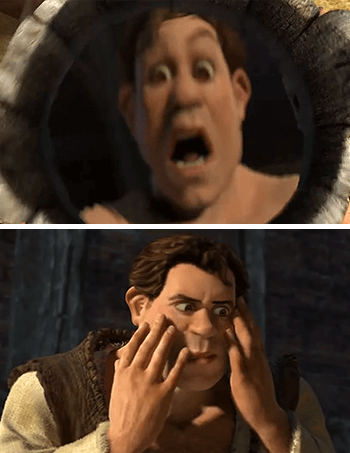 When a character undergoes a sudden transformation or change of some kind, they don't always realize what's happened until it's too late. Part of this is because other characters might not want to be rude and call attention to it, and other times they're alone and have nobody there to react, anyway. So, one of the easiest ways of getting a character to see what's happened to them is by having them look in a mirror, or another reflective surface, and discover it that way.

This can have the dual purpose of revealing it to the character as well as the audience, keeping their features obscured until they look in the mirror, but it can just as easily be a shock only to the character. In this way, it can either work as a Reveal Shot, or as a bit of suspense, where the audience waits to see how the character will react to their new looks. In either case, the character is likely to scream, possibly dropping the mirror in the process, or causing others to come running and see it for themselves. In more extreme cases, it'll cause them to Rage Against the Reflection.

In downplayed examples, the "transformation" is something more minor, such as a bad hair-cut. What matters is the way of discovering their new appearance, not the severity of it.

Compare The Mirror Shows Your True Self (which isn't about transformation) and House of Broken Mirrors (which may happen before or after this). Related to Tomato in the Mirror (that's about realizing that it's been oneself all along, this one is about transformations that have happened as part of the story that do not necessarily mean that it was oneself all along) and Just Woke Up That Way. When the audience sees the transformation result before the character does, this overlaps with Oblivious Transformation. Has nothing to do with Mirror Scare, which is a different kind of mirror-related reveal.

Don't confuse with Description in the Mirror, where a character's appearance is described while they look in a mirror, which this can overlap with.

This trope deals in Reveals, so there's unmarked spoilers ahead!