Western Animation / How to Train Your Dragon 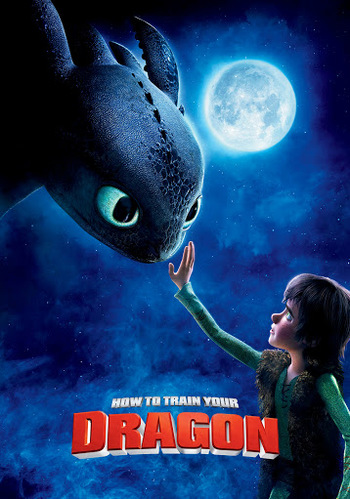 Hiccup: Dad, I can't kill dragons.
Stoick: But you will kill dragons!
Hiccup: No... I'm really very extra sure that I won't.
"This is Berk. It's twelve days north of Hopeless and a few degrees south of Freezing to Death. It's located solidly on the Meridian of Misery. My village. In a word, sturdy. It's been here for seven generations, but every single building is new. We have fishing, hunting, and a charming view of the sunset. The only problems are the pests. You see, most places have mice or mosquitoes. We have... dragons!"
— Hiccup, Opening Monologue

Based very loosely on the book series of the same name, How to Train Your Dragon is a 3D DreamWorks Animation picture released in 2010, directed by Chris Sanders and Dean DeBlois. The protagonist, Hiccup, is a young Viking boy who lives on the island of Berk, where men are tough, women are tougher, and dragons are evil, destructive, livestock-pillaging pests that must be destroyed on sight. Hiccup wants to prove his worth — particularly to his father Stoick, the Viking chief — but he's gawky and brainy in a society that values brawn. Deeming Hiccup to be too weak to fight dragons head-on, Stoick assigns Hiccup to apprentice under Berk's blacksmith, to create weapons and gadgets to use against the dragon hordes.

Then one night, during a raid, Hiccup manages to bring down the most elusive, feared dragon of all: a Night Fury. Of course, nobody believes him—compared to other species of dragons, Night Furies are so rare that virtually no one has ever actually seen one (much less injured one), so Hiccup has to go alone to find the creature so he can kill it and prove his claim. But when he finds the crippled dragon and sees just how scared the mighty creature is, he ultimately can't bring himself to do it. He frees the dragon, which he later names "Toothless," and thus begins a clandestine friendship. As Hiccup nurses Toothless back to health, they form a bond of trust, and ultimately they become an inseparable flying, fighting pair — just in time for an even greater monster to appear.

The movie was followed by two sequels and other media, starting its own franchise.

Recently, DreamWorks announced a film adaptation of Cowell's book The Wizards of Once

, which was still in development.

For the character sheet, go here.

How to Train Your Dragon provides examples of:

open/close all folders
Tropes A to C

Later lampshaded when the other young Vikings hear his plan:
Ruffnut:: You're crazy! [leans in close and whispers] I like that.

Example of:
Our Dragons Are Different