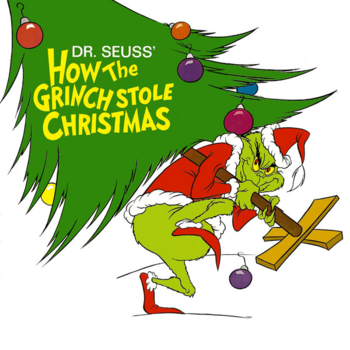 ♫ I wouldn't touch you with a...thirty-nine-and-a-half foot pole! ♫
"You're a mean one, Mister Grinch!
You really are a heel!
You're as cuddly as a cactus!
You're as charming as an eel!
Mister Griii-INCH!
You're a bad banana with a
Greasy black peel!"
Advertisement:

An animated Christmas Special based upon Dr. Seuss' book of the same name. It was directed by Chuck Jones, with Boris Karloff providing the voice of both the eponymous Grinch and the narrator, June Foray voicing Cindy Lou Who, and Thurl Ravenscroft performing the classic tune "You're a Mean One, Mr. Grinch". The special, which follows the plot of the original book closely, was originally broadcast on CBS on December 18, 1966, and since then has come to be regarded as one of the all-time classic TV Christmas specials, and later adaptations of the work incorporate elements of it to varying degrees. In particular, this is the adaptation that gave the Grinch the green fur that has stuck in every single adaptation (the book has black-and-white illustrations with red detailing, so he didn't have a set color until this point) since, along with the songs "You're a Mean One, Mr. Grinch" and "Welcome Christmas".

This special has its own continuations: Halloween Is Grinch Night and the crossover The Grinch Grinches The Cat In The Hat.