Western Animation / The Bear That Wasn't 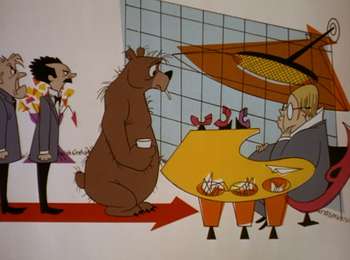 "You are not a bear; you are a silly man who needs a shave and wears a fur coat."

The Bear That Wasn't is a 1967 MGM cartoon produced by Chuck Jones, based on the 1947 book of the same name by Frank Tashlin. Tashlin was also credited as a producer but was not involved in the actual production process.

The bear finally accepts what the factory management has kept telling him. He goes to work in the factory. When fall comes and turns into winter, the bear's instincts take hold. He goes into a cave and hibernates for the winter. In spite of everything all the bosses and the zoo bears said, the bear "was not a silly man...and he was not a silly bear, either".

Last animated short film ever made by Metro-Goldwyn-Mayer.

For the last time, you are not a troper. You are silly man who needs a shave and wears a fur coat.