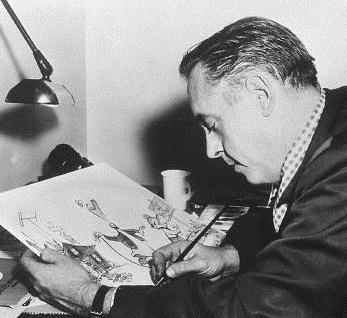 Tish Tash, working on a scene from the Columbia Cartoon "The Tangled Angler".
Advertisement:

Francis Fredrick von Taschlein (February 19, 1913 – May 5, 1972) was a prominent animator, writer, and director of both cartoons and live-action films. His most notable work was done for the Leon Schlesinger cartoon studio during The Golden Age of Animation, having three separate stints at the place.

Initially, Tashlin cut his teeth working for Paul Terry as an animator on the Aesop's Film Fables series of cartoons, only to quickly drift off to another animation stint at Van Beuren Studios. Finally, in 1932, he found work at the then-rising Looney Tunes and Merrie Melodies cartoon studio, working as an animator while working on a short-lived comic strip in his spare time called Van Boring, the name being an obvious jab at his previous boss. When Leon tried to swindle Frank into giving him a cut of the comics profits, Frank told him to shove it and promptly lost his job as a result. Once again adrift, he did a brief stint at the Ub Iwerks cartoon studio in 1934, only to leave in 1935 for Hal Roach Studios to be a writer on the Our Gang series, where he learned quite a bit about live-action film-making, including film-camera techniques.

In 1936, Leon managed to lure Tashlin back to his studio, giving him a position as a director there, right during a time when Tex Avery was starting to take the studio away from its Disney roots in favor of faster-paced, more cartoony shorts. Frank jumped right in, getting off to a good start with "Porky's Poultry Plant", where he adapted live-action-style fast cutting and dynamic camera angles into his cartoons, giving them a cinematic, energetic feel lacking in Tex Avery and Friz Freleng's cartoon shorts. Despite this, he wasn't particularly happy due to being stuck working on Porky Pig cartoons, who Tashlin later admitted was his least favorite character.

However, he left the studio again, with his crew being handed over to Chuck Jones, while he went to work for Disney from 1938 to 1940, where he began story work on Walt's proposed Mickey Mouse feature, which would later evolve into the "Mickey and the Beanstalk" segment of Fun and Fancy Free.

In 1941, he found work at Columbia Cartoons, where he directed three short cartoons, one of them being the first of Columbia's star series The Fox and the Crow—the short in question, "The Fox and the Grapes" was the first cartoon to use a "blackout gag" format, which director Chuck Jones would cite as an influence on his Road Runner cartoons.

He would once again return to Warner Bros. in 1943, this time bringing stylized, magazine-like angular designs to his new shorts. Some of these later shorts notably had sexual themes, particularly Plane Daffy (which had a Femme Fatale Spy character named Hatta Mari, whose blond hair and top-heavy hourglass figure recalled real-life sex symbols of the day). It's been said that the difference between Bob Clampett's cartoons and Frank Tashlin's cartoons in terms of risqué humor is that Tashlin was more polished and subtle while Clampett was broader, wilder, and more adolescent (though some Tashlin cartoons, such as "I've Got Plenty of Mutton" and "Swooner Crooner" do have their moments of Clampett-esque raunchiness).

After his cartoon career ended, Tashlin went on to direct and write for many live-action films, most famously the Jayne Mansfield comedies The Girl Can't Help It and Will Success Spoil Rock Hunter?, and numerous Jerry Lewis movies. His films are notable for including live-action versions of cartoon gags, such as the near-sexual reactions of every man who sees Jayne Mansfield's character walk by in The Girl Can't Help It (such as the ice melting in the ice truck and the milkman's bottle of milk popping and spilling over). He also wrote five books: "The Bear That Wasn't" (1941), "How The Circus Learned to Smile" (1949, "The Possum That Didn't" (1950) and "The World That Isn't" (1951) and a self-help cartooning book "How to Create Cartoons" (1952). He even briefly returned to animation in 1967, adapting one of his children's books The Bear That Wasn't into an MGM animated short, directed by his former colleague Chuck Jones (which Tashlin didn't like).

To get a more deep idea of Tashlin as a person and his history at Warners, an interview of him has been posted by Micheal Barrier here.