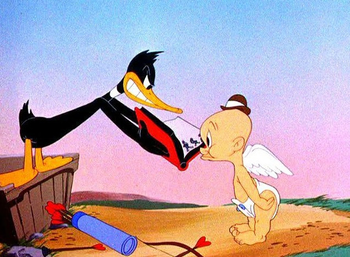 Now look at me! A has-been! A henpecked duck! A Kansas-back cassanova! And it's your fault!
Advertisement:

The Stupid Cupid is a 1944 Looney Tunes short directed by Frank Tashlin and starring Daffy Duck and Elmer Fudd.

Spring is in the air, and Cupid (played by a giggling Elmer) is out to spread all the love he can. After a few successful shots, including bringing two lovebirds together and making a dog fall in love with the cat he was chasing, Cupid attempts to shoot Daffy, only to be stopped short by the duck who tells him to back off, explaining he had shot him the previous year, resulting in him ending up in a Shotgun Wedding and becoming a Henpecked Husband with a dozen kids. Angry with the cherub for putting him in this fix, Daffy breaks Cupid's arrows and sends him flying with his own bow. In retaliation, Cupid targets Daffy with a giant bow and arrow made from a tree that sends Daffy flying. Daffy is soon overcome by the arrow's magic and falls in love with a nearby hen. Unfortunately, not only is the hen not interested in Daffy, she happens to be Happily Married.