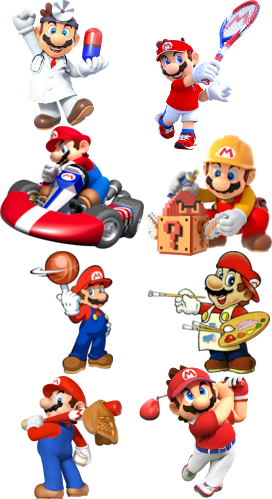 Jack-of-All-Tradesnote Such as being a doctor, painter, ace driver, builder, and champion tennis, golfer, baseball and basketball player (and Stats), Master of None. Including plumbing, jumping, and princess rescuing.
"A human being should be able to change a diaper, plan an invasion, butcher a hog, conn a ship, design a building, write a sonnet, balance accounts, build a wall, set a bone, comfort the dying, take orders, give orders, cooperate, act alone, solve equations, analyze a new problem, pitch manure, program a computer, cook a tasty meal, fight efficiently, die gallantly. Specialization is for insects."
— Lazarus Long, Time Enough for Love
Advertisement:

Many modern-day professionals work to be an expert in a field, be it mathematics, history, or graphic design. This training is what allows them to not only make a living wage, but earn a comfortable life without overexerting their brain.

Throughout history, there have been people who step beyond this and have excelled in multiple fields, called polymaths. One period in history produced several of the ones that are now most famous, the Renaissance period. Because of this, today most people know them as Renaissance Men.

A Renaissance Man is anyone in Real Life or media who is an expert in many fields, having a broad base of skill and knowledge. Many experts in a field develop skills that are necessary in other fields or find themselves requiring skills in another field. On the other hand, being a Renaissance Man used to be far easier than it is now, simply due to the unbelievable volume of knowledge that five centuries of scientific progress have produced. A few hundred years ago, it would have been reasonable for a single intelligent man to know all of humanity's scientific knowledge, but, well... Science Marches On. For these reasons, in the modern age, people who study a lot of topics besides their basic activity fall towards the Jack-of-All-Trades end of the spectrum instead of achieving true mastery in all of them.

Take, for example, mathematics. Until recently, computer science was the domain of the mathematics department in many universities, and many math courses, such as number theory and graph theory, are still cross-listed with computer science. From physics, in order to study motion, Isaac Newton invented calculus. Sociology makes heavy use of statistics. Bioinformatics is a massive crossover between math, biology, and computer science. Many doctorate-level mathematicians will have experience and skill in one of these overlapping areas, often to the point of being called experts in both mathematics and the other field(s).

While the Renaissance Man is similar to the Omnidisciplinary Scientist, his fields don't need to be limited to science. He also isn't necessarily a master of all known science, just a good chunk of it. The Renaissance Man may suffer from M.D. Envy if people object to calling him a "doctor" because he doesn't practice medicine. This trait may be used to show that yes, The Ace is just so insufferably cool. Many a Cultured Badass will, after close examination, turn out to be a Renaissance Man. If this person is Trapped in Another World and wants to end the Medieval Stasis, the Renaissance Man may also be a One-Man Industrial Revolution.

Compare Master of All, another character with a wide variety of skills; the key difference is that a Master of All is good at a wide variety of specific things, but could still potentially fail at learning something really esoteric, like quantum physics or sociobiology. In contrast, a Renaissance Man is understood to have boundless potential—whatever he studies, he'll excel at, because he's just good at whatever he puts his mind to. Put another way, a Master of All is defined by his wide range of skills that are useful in many situations, whereas a Renaissance Man is defined by the ease with which he learns things and applies the knowledge.

The Trope Codifier was Baldassare Castiglione's Book of the Courtier (in print in several languages since 1528), which explained that a gentleman ought to be able to do everything, but nothing well enough to look as though he was a specialist.

Has nothing to do with the 1994 film starring Danny DeVito, or the next-to-last episode of Star Trek: Voyager. Polar opposite of Crippling Overspecialization.