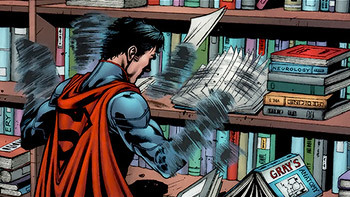 Everybody knows smart people love reading. That's why surrounding a character with big, thick, difficult-looking books whenever possible is considered an acceptable way of indicating that that person is meant to be brainy.

Every now and then, though, you'll find yourself in a situation where you want to establish a character as even smarter than your run-of-the-mill smart guy. You may even want to convey that they're some kind of bona fide genius. So what do you do?

Super-Speed Readers are characters who are seen turning the pages of books at improbable speeds, presumably retaining all of the information they're flipping through, as a way of demonstrating their intelligence. While it is possible for the audience to learn a character has this ability in some other way, in visual media, it's fairly common for a scene to be present where we actually get to see this feat performed, most likely because occasions where high IQ can actually be translated into to exciting visuals are few and far between.

Disappointingly, speed reading in Real Life is not actually a function of raw IQ, but a learned skill which involves tedious practice and sacrificing some degree of comprehension in favor of speed. Also, in order to make this sort of thing look impressive on film, it's generally necessary to depict characters reading at a rate that would noticeably exceed those of the fastest known real-life speed readers, if anyone in the audience were to get out a stopwatch and do the math. Neither of these things are of any concern when a speed reading character is meant to be supernaturally intelligent, though, which is often the case when this trope is in play.

One of the things the other 90% of Your Brain is used for. Often seen alongside, or even conflated with, Photographic Memory. Potentially a skill of the TV Genius, particularly when he has an IQ score that is too high to make sense. The Emergent Human will use this skill to get caught up on the sum total of human knowledge over a long weekend.

Don't expect anyone to ever get carpal tunnel syndrome from turning thousands of pages per minute — the less-glamourous Required Secondary Power of "Super Page Turning" is bundled in for free.