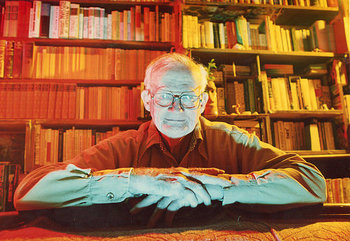 Atrox Fabulinus, the Roman Rabelais, once broke off the account of his hero Raphaelus in the act of opening a giant goose egg to fry it in an iron skillet of six yards' span. Fabulinus interrupted the action with these words: "Here it becomes necessary to recount to you the history of the world up to this point.
After Fabulinus had given the history of the world up to that point, he took up the action of Raphaelus once more. It happened that the giant goose egg contained a nubile young girl. This revelation would have been startling to a reader who had not just read the history of the world up to that point: which history, being Fabulinian in its treatment, prepared him for the event.
— The Fall of Romenote A non-fiction book, but it's written in an oral style. Fabulinus is invented for this chapter and is just Lafferty lampshading his writing style
Advertisement:
There was a writer from Tulsa, Oklahoma (he died in 2002), who was, for a little while in the late 1960s and early 1970s, the best short story writer in the world. His name was R. A. Lafferty, and his stories were unclassifiable and odd and inimitable — you knew you were reading a Lafferty story within a sentence. When I was young I wrote to him, and he wrote back.
— Neil Gaiman

Raphael Aloysius Lafferty (November 7, 1914 – March 18, 2002), more commonly known as R.A. Lafferty, was an American author of Science Fiction and Fantasy. He is most associated with the state of Oklahoma, where he spent most of his life, although he was born in Iowa. Something of a late bloomer, he first started publishing fiction in his mid forties, midway into a successful career as an engineer and well after a stint in the army during World War II. Lafferty's fiction is blatantly anti-realistic, taking as its model tall tales, oral folklore, and standup comedy more than mainstream fiction or non-fiction, and the Fourth Wall is frequently broken. He is also one for Mood Whiplash, and his stories and novels often start off in the comic realm before switching to tragedy or horror and maybe coming back.

This way lies madness and rump of skunk.