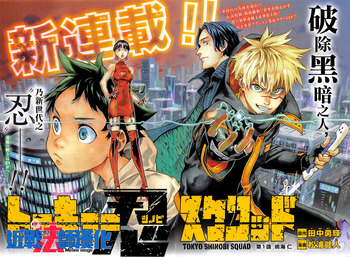 Looking to hire?
"If you're going to survive in this country, you need a team you can count on — one that won't lie to you or betray you. For us shinobi, those are called squads."
—Jin Narumi
Advertisement:

The year is 2049. In an attempt to revitalize Japan and bring it up to international standards, the prime minster ordered the construction of "hyperloop tunnels" that bridged it to every major country in the world. The resulting influx of mass immigration has turned Tokyo into the most crime-ridden city in the world in a scant 20 years. Individuals and corporations looking to defend themselves began hiring clandestine mercenaries who lurk in the shadows... shinobi.

Enter Jin Narumi, a 17-year-old shinobi who happens to be running up a tab at his favorite ramen truck. Unlike most others in his line of work, he and his team, the Narumi-kai, will only take work they believe to be honorable and just... which doesn't net them much cash. That's when he's approached by En, a young Thai boy he'd helped earlier, who asks to hire him as a bodyguard with the mere 100 bahtnote $3.27, €2.90, or £2.61 he has left in his wallet. Jin takes the job anyways despite the meager pay, but gets more than he bargained for when he learns that En has been guarding a priceless ninpo scroll.

Written by Yuki Tanaka and drawn by Kento Matsuura, Tokyo Shinobi Squad is a manga that was serialized in Wekely Shonen Jump from June 2019 to December 2019.