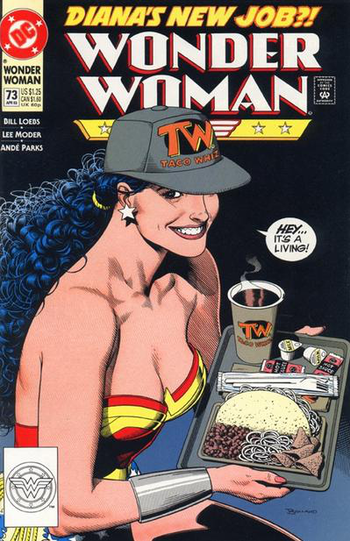 "Being a freedom fighter, a force for good, it's a wonderful thing. Get to make your own hours, looks good on a résumé... but the pay sucks."
— Alfred Bester, Babylon 5
Advertisement:

So, as we've seen, the lifestyle of a hero often isn't that great. One of the many ways heroes can have it rough is the state of their bank account, because as it turns out, Heroism Won't Pay The Bills.

See, Humongous Mecha, magic powers, and superpowers aren't exactly useful in the workplace (except when they are). As a hero, you are spending time mastering skills that might be world-saving now, but have no marketable value later. Being a Triple Shifter also isn't exactly conducive to a good conventional education/career. If they're not careful, a hero could well end up a full-time Burger Fool or working a Soul-Sucking Retail Job just to make ends meet.

Furthermore, when a hero asks Dude, Where's My Reward? everyone thinks he's either joking or being selfish. What if someone really, REALLY needs Hospitality for Heroes?

There are several ways to avoid this. One way is to be lucky enough to have a One-Hour Work Week. Another is for your civilian identity to be a (seeming) Rich Idiot With No Day Job or someone else who doesn't need to work for a living. Some jobs are more suitable for a (super)hero, but may not avert this trope entirely. Some more organized and sponsored Super Teams or other organizations heroes work for will pay 'employees' for their heroism; however, some heroes are not cut out for the trappings of working for someone else, and the malevolence or incompetence of the greater organization may make a hero's life difficult in other ways. Thank god for Hero Insurance, or things might be much worse, eh?

May be a reason for Horrible Housing. Sister Trope to The Masquerade Will Kill Your Dating Life- and Reed Richards Is Useless, because rarely do superheroes use their epic powers for anything other than combat.