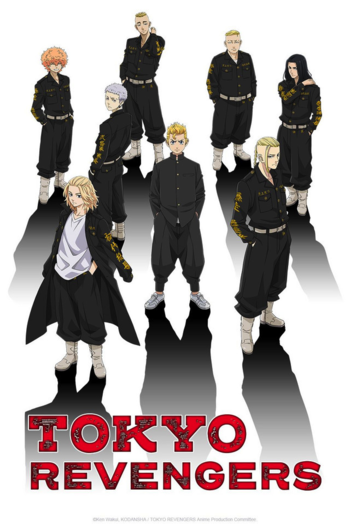 Takemichi Hanagaki is a part-timer who lives in a crappy apartment and works at a job where his six-years-younger boss treats him like an idiot. One day, on the news, he founds out that the only girlfriend he ever had, Hinata Tachibana from middle school, was killed by the infamous Tokyo Manji Gang. As if to hammer in how much his life has hit rock-bottom, he gets pushed onto the train tracks. However, instead of dying, he time-leaps twelve years back to the past, when he was in middle school. To save Hinata and change his own life, Takamichi must ascend to the top of the Tokyo Manji Gang.

Tokyo Revengers is a manga written by Ken Wakui, best known for his other hit yakuza manga Shinjuku Swan. It launched in Weekly Shōnen Magazine in 2017.

An anime adaptation by Liden Films premiered in April 2021. A live action film and stage play premiered in the same year.