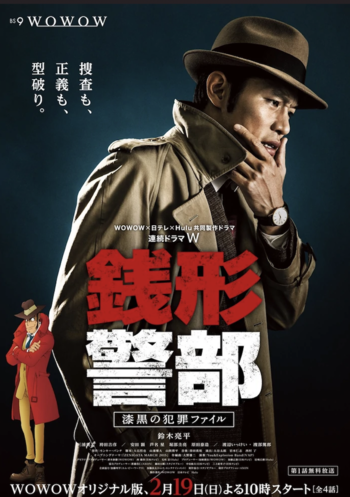 Leave everything to me, Zenigata!
This man is Zenigata Koichi, a famous detective who risks his life to arrest Lupin the 3rd. He's a stubborn, honest man who won't forgive evil. What? You already knew that? But I wonder if you know what he gets up to when he's not chasing Lupin? It seems he charges in and solves cases in his own way. Shall I show you? This is a story of Lupin the 3rd's eternal rival, the lovable Inspector Zenigata.
— Opening narration
Advertisement:

Inspector Zenigata is a 2017 live-action mini-series based on Inspector Zenigata of Lupin III fame. Framed as a series of side stories detailing what Zenigata does when he's not chasing his Arch-Enemy, the series is remarkably grounded for the franchise, trading aliens and time travel for serial bombers and assassins. Never the less, Zenigata himself remains just as determined as ever, never giving up the fight against evil villains alongside fellow officers Kunikida Shintaro and Natsuki Sakuraba.