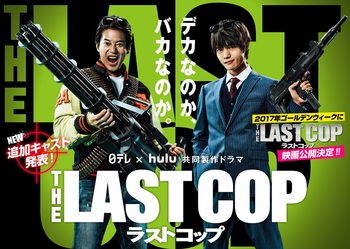 Even more nuts than the poster looks!!
Advertisement:

30 years ago, Kosuke Kyogoku (Toshiaki Karasawa) was a young police officer. He went after the dangerous criminal Kagura, but had an accident and fell into a coma.

Now, 30 years later, Kosuke wakes up from his coma. He is now in his 50s and the world has completely changed. He begins to work again as a cop and partners with young detective Ryota (Masataka Kubota). Ryota is geeky and timid, while Kosuke is brash and aggressive. Their new story begins.

The series is a co-production between NTV and Hulu Japan. It is a remake of the german series "Der letzte Bulle" ("The last cop") that ran from 2010 to 2014.