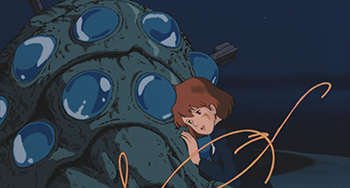 Even Big Creepy-Crawlies deserve love.
"The strange blue world to which my father sent me.
If you knew how you are loved, not one of you would raise a hand in rage again."
— Superman, gazing at Earth from space
Advertisement:

This character, simply put, loves everyone. Loves them with a deep, spiritual love that means they will shake heaven and earth, destroy gods and planets, bring nations to their knees, etc. for the person they just met yesterday. They will believe the best of everyone, and constantly give someone a second chance (though they will defeat the Big Bad). They repay cruelty with kindness and anger with calm. They are the ones who will suffer for the sins of their loved ones. Most people think they're insane, but somehow they pull it off.

The Empathic Weapon trusts them completely, as does every animal and child who immediately recognize the good in them and take quickly to them. Their every step causes flowers to bloom. Their circle of friends are in awe of them, if not somewhat in love with them. They'll even attract an Anti-Hero or two who will stick around so they can figure out what drugs this person is taking — and where they can get some. In their hands, The Power of Love and The Power of Friendship can be an awesome force, they may be the standard-bearer for the message that You Are Not Alone, You Are Better Than You Think You Are and if anything can redeem a person against the odds by showing them the light of goodness, it will probably be the All-Loving Hero.

On the Sliding Scale of Idealism Versus Cynicism, All-Loving Hero is a heavily idealistic character. Even in a dark world, they are ideal. They will always say Silly Rabbit, Cynicism Is for Losers! and inspire hope.

In terms of The Four Loves, All-Loving Hero is Agape, or Unconditional Love for All, personified. However, by no means is the character exempt from the other three loves.

The Fool is sometimes the embryonic state of All-Loving Hero doubled as the Idiot Hero. A Magnetic Hero has the intangible quality of earning respect and followers that some All-Loving Hero characters do but without needing the "love and forgive everyone" part. An All-Loving Hero who takes their idealism too far into Facepalm-worthy idiocy (like seriously trying to trade the Artifact of Doom if the villain promises not to hurt anyone) may lapse into Stupid Good or Lawful Stupid, and they can also form into Kindhearted Simpletons if they manage to help others thoroughly. If such a character has moments where they are Not So Above It All or fall short of this standard, you're likely to be in front of a Broken Messiah.

Sub-Trope to Ideal Hero. Compare Martyr Without a Cause, The Paragon, The Heart, Incorruptible Pure Pureness, Purity Sue, Nice Guy, and Rousseau Was Right. In Shades of Conflict, this Trope heavily synergizes well with White-and-Grey Morality, thanks to the latter's principle that the characters are either good or misguided.

Contrast Dark Messiah, which can stand in opposition to this but is more Messianic Archetype + Anti-Hero as well as Misanthrope Supreme (although a more Anti-Villain version may have been a former All-Loving Hero, who came to believe that the only way to truly save everyone was taking extreme measures). Dueling Messiahs is what happens when those two come to a head. Also contrast Misanthrope Supreme, who thinks all of mankind is irredeemable scum. Effectively the polar opposite of an All-Loving Hero in every way and its Evil Counterpart.

In the context of methods of climax fulfillment, this may be referred to as a "Love Hero." May overlap with For Happiness as character motivation.

Having joined with the Ravagers in this variant timeline, T'Challa has been able to turn them from brigands into vigilantes along with recruiting unlikely allies: Thanos among them!

Having joined with the Ravagers in this variant timeline, T'Challa has been able to turn them from brigands into vigilantes along with recruiting unlikely allies: Thanos among them!