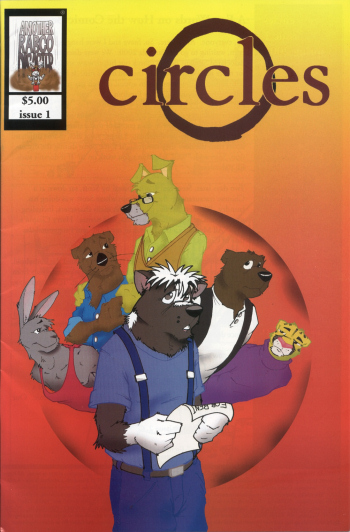 Counter-clockwise from the top: Paulie, Douglas, Taye, Marty, Ken, and Arthur.
"Dear Douglas,"
— The beginning of every one of Paulie's diary entries.
Advertisement:

Circles is a Furrynote (aesthetically, anyways; it is the Trope Namer for Furry Lens, after all) LGBT Slice of Life comic book about 6 gay men living in a large house together in Boston. The story concerns itself with the comings and goings of the 6 inhabitants: Paulie, the loving den mother of the group dealing with the effects of HIV; his for all intents and purposes husband, Doug; and their four renters: Ken, part Straight Gay, part Gym Bunny, part Anything That Moves; Arthur, an artist and one of Paulie's oldest friends; Taye, a Camp Gay Performance Artist, and Marty, the Straight Man and Audience Surrogate. The 6 core characters, plus a few secondary characters, form a family unit to work through problems and situations.

The story is told mostly from Paulie's point of view as he writes in a diary, but his is not the pure point of view, since we see many things to which he is not privy. Paulie's diary segments are a Framing Device used to introduce the subject of that season's problem.

A very much beloved comic book series among those who have read it, Circles is usually one of the books many furries would indicate to prove that they're not all sex maniacs. It also had a fairly glacial issue speed, as it had taken 7 years to come out with 8 issues in a comic that started out as "4 times a year".

The series started in the spring of 2001. According to the writers, there were supposed to be 13 issues. Issue 9 would have Ken's backstory, Issue 10 would be a collection of short stories, Issues 11 and 12 were supposed to have tragic events (fans already speculating that one is Paulie dies from AIDS), and Issue 13 will be the final issue. However, due to the comic's severe obscurity, all of this was scrapped for a final issue, Circles: The Years Keep Rolling By, which was released in 2015, thus the series has finally concluded after an extremely severe Schedule Slip.

A reboot of some sort

The issues are all available on the Rabbit Valley website here

. As well as an official site here

Oh, and by the way, don't let all of the fuzzy animal people and bright colors fool you here. This is a very dramatic and heavy story with funny moments and emotional rollercoasters. In layman's terms, this is a very sad story.

For more Slice of Life Furry Comics that feature similar themes and star a group of cast members, compare Leo Magna's Fur-Piled and Vince Suzukawa's ISO, which happened to be inspired by Circles.

Possible spoilers are left unmarked. It is recommended to read the series first before browsing these tropes.