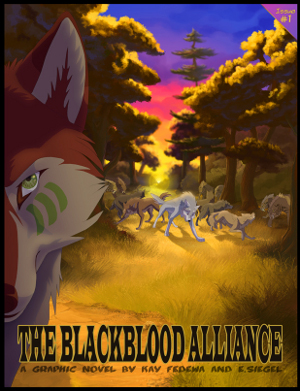 Years ago, when great mammoths roamed the earth, and true civilization had yet to be born, a battle took place between the Stoneclaws, a clan of warlike saber-toothed cats, and the peaceful, unprepared dire wolves of Inaria.

The Stoneclaws won by a landslide. The alpha and beta male wolves were killed, along with almost half of Inaria's forces.

Desperate, widowed and with her young in peril, alpha female Whitewind's only hope is the Blackbloods: huge, powerful wolves who used to guard Inaria before they were exiled because of a misunderstanding over their leader, Swiftkill.

It is currently under a reboot. The reboot can be read here

; the old comic can be read here

Not to be confused with Blackblood Brothers.

The reboot provides examples of:

The old comic provides examples of: