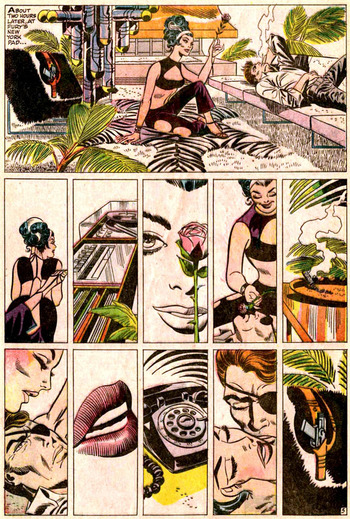 "This isn't about the gun! This is about sex!"note Interestingly, as originally written this was not meant to be a sexy discretion shot. The characters were going to hug; The Comics Code changed the final panel to the holstered gun instead.
"You never see anything anyway. They always, uh, turn the camera, and... play music and... y'know, the wind blows and then the curtain moves. You don't see anything."
— Frustrated viewer, The Truman Show
Advertisement:

Two characters have been talking, talking has turned to kissing, and as kissing starts to turn to...other things, and the camera suddenly decides to look elsewhere. The view pans away as it fades to black or rests upon an intimate but innocuous object like a burning candle, the curtains of the open window, or the door being closed. We're not supposed to care about this new subject. It's just the show's way of saying, "They're going to have sex now, let's give them some privacy".

This shot can be turned into a passage-of-time montage, e.g. a dissolve shows the candle going from just-lit to guttering, or the darkened window now gleams with the rays of the rising sun. When the camera wanders back we see our couple post-coitus, cuddled up for some pillow talk or slumbering peacefully beneath their Modesty Bedsheet. Sometimes this dissolve will include an actual clock, giving a clearer indication of the couple's... stamina (this is occasionally spoofed when the time elapsed is only a few minutes, implying the moment of passion was neither long nor particularly satisfying).

If it's a woman's first time, you may see a flower drop to the floor to represent the loss of her "innocence."

This trope is useful for various reasons. If the Censorship Bureau simply does not allow depictions of sex, this gets the idea across to the audience without showing anything that would offend the Moral Guardians. It can also be used in works that would permit explicit sex scenes, but this particular act of lovemaking does not play a significant role in the story. If a production is intended at a family audience, the trope can be utilized to get the point across without being explicit about it or risking getting a higher viewer advisory rating that could impact box office or ad revenue. Also sex scenes are notoriously difficult to write well and sympathetically, and can often distract from the story — exactly what is Blue Is the Warmest Color about? — so can be used to avoid having to try.

Similar tropes include Dress Hits Floor, Don't Come A-Knockin', Kissing Discretion Shot, Rape Discretion Shot (if the sexual encounter is non-consensual), Take Our Word for It, Coitus Ensues (if the scene doesn't fade to black), Sexy Coat Flashing, Something Else Also Rises, Relax-o-Vision, Sex Dressed. This may be a result of Crashing Through the Harem. Compare Lewd Lust, Chaste Sex, when everything is described in sexy detail except the deed itself. Compare Post Coital Collapse.

Blanca and Xuan Sleep Together

Blanca and Xuan start undressing and kissing as they fall to the floor and the screen fades to black.

Blanca and Xuan Sleep Together

Blanca and Xuan start undressing and kissing as they fall to the floor and the screen fades to black.