Series / That Was the Week That Was 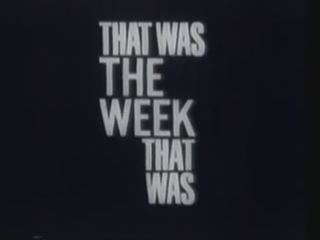 It's over, let it go...
That Was the Week That Was (abbreviated to TW3) was a satirical television comedy programme shown on BBC television between 24 November 1962 and 28 December 1963. It was devised, produced and directed by Ned Sherrin, and presented by David Frost.
Advertisement:

The programme is considered to be a significant element of the "satire boom" in the United Kingdom in the early 1960s. At this stage in the decade, far from challenging entrenched social attitudes and conventions, the 1960s promised to be a continuation of the socially conservative, conventional and stifling 1950s. The historical significance of this show is that it was the first challenge to convention of the decade. It broke new ground in comedy through lampooning the establishment and political figures of the time. This is so commonplace now that it is hard to believe the practice of satirising political leaders and those hitherto perceived to be our "social betters" had to begin somewhere and was in fact frowned upon - but it began here, 60 years ago. Later shows such as Spitting Image would simply not have happened were it not for pioneering shows such as this. Its first broadcast coincided with coverage of the politically charged Profumo affair, and John Profumo, the politician at the centre of the affair, became one of the first targets for derision. He was certainly not the last.

An American version by the same name, also featuring Frost, aired on NBC from January 1964 to May 1965. Moral Guardians in both countries repeatedly protested, but it was too late - the genie was out of the bottle and practically every TV show that even dabbled in satire has something of TW3 about it. The programme always opened with a song – That Was the Week That Was – sung by Millicent Martin to Ron Grainer's theme tune, its words rewritten to include topical issues in the news.

The series was cancelled in early 1964 as a General Election had been called and the BBC claimed that the programme's material could compromise its impartiality. Sherrin later revived the format as Not So Much a Programme, More a Way of Life (1964-65, also fronted by Frost) and BBC-3 (1965-66, fronted by Robert Robinson), though neither is quite as fondly remembered as TW3.