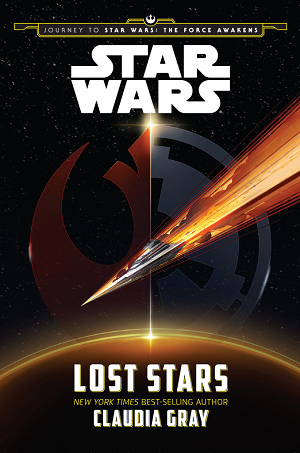 The reign of the Galactic Empire has reached the Outer Rim planet of Jelucan, where aristocratic Thane Kyrell and rural villager Ciena Ree bond over their love of flying. Enrolling at the Imperial Academy together to become fighter pilots for the glorious Empire is nothing less than a dream come true for the both of them. But Thane sours on the dream when he sees firsthand the horrific tactics the Empire uses to maintain its ironclad rule.
Advertisement:

Bitter and disillusioned, Thane joins the fledgling Rebellion—putting Ciena in an unbearable position to choose between her loyalty to the Empire and her love for the man she's known since childhood. Now on opposite sides of the war, will these friends turned foes find a way to be together, or will duty tear them—and the galaxy—apart?

A Star Wars Expanded Universe young adult novel written by Claudia Gray. It's part part of the Journey to the Force Awakens media campaign, Lost Stars gives readers a macro view of some of the most important events in the Star Wars universe. From the rise of the Rebellion to the fall of the Empire, these major moments are filtered through the eyes of two childhood friends—Ciena Ree and Thane Kyrell—who have grown up to become an Imperial officer and a Rebel pilot.