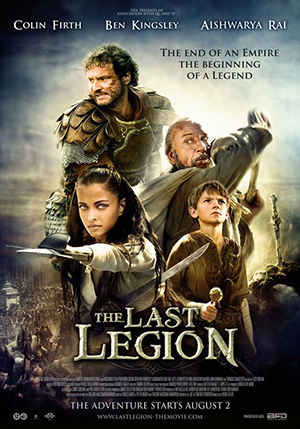 "One edge to defend, one to defeat. In Britannia was I forged to fit the hand of he who is destined to rule."
Advertisement:

Rome is falling, crumbling into disrepair. In the last five years there have been five Caesars, and every one was murdered. Now the title of Caesar, highest office in Rome, must fall to the shoulders of a young boy, Romulus. Scared, naive, and unprepared, he is barely on the throne for hours when the dreaded Goths descend upon Rome. Deposed and exiled, Romulus is rescued by a small band of loyal warriors, but not before uncovering an ancient sword and the prophecy attached to it. Pursued by the Goths, the heroes are led by the prophecy to faraway lands where Romulus must find his destiny.

An action adventure movie made in 2007, staring Colin Firth, Ben Kingsley, Aishwarya Rai and that psychic kid from Doctor Who, loosely based off a novel of the same name by Valerio Massimo Manfredi.