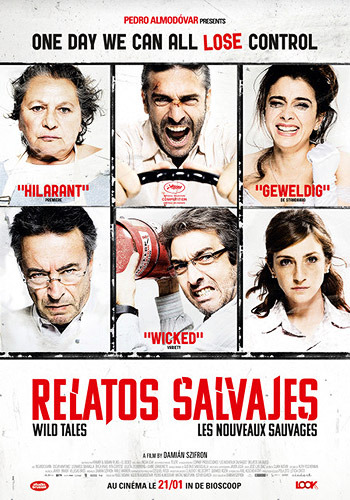 Because revenge is a dish best served cold...
Advertisement:

Pasternak: As two passengers boarding a plane start to make small talk, the girl discovers her conversation partner is the music critic that destroyed the career of her former boyfriend, by the name of Pasternak. Another passenger was his teacher... and gradually, they discover that they all knew that guy... who happens to be their flight attendant. As they discover that Pasternak has locked himself inside the plane's cockpit, they realize too late why he has arranged to have them all on board at the same time...

Las Ratas (The Rats): After a loan shark named Cuenca has ruined her family (driving her father to suicide), a girl has moved away from her village and works as a waitress in a road diner... and the monster is now here, asking for a meal. Even worse, she discovers he's running for mayor. The girl refuses the cook's offer to put rat poison in his food, but the cook poisons it anyway. The waitress is now facing a moral dilemma, especially when Cuenca's son shows up as well, and starts eating from his dish...

El Más Fuerte (The Strongest): Diego travels by road in his brand-new Audi when he reaches Mario's old beat-up car who pretends to block his way. Diego overtakes Mario and insults him as he goes past, mocking him for being jealous. Later on, Diego gets a flat tire and proceeds to change his wheel. Unfortunately, Mario catches up with him, forcing Diego to take shelter in his car. Mario pulls up before him and proceeds to trash Diego's car, smashing the windshield and doing his business on the bonnet, jeering all the way and calling Diego a coward. Enraged, Diego proceeds to show him that he means business...

Bombita (Little Bomb): As Simón Fisher, a demolition engineer, is buying a cake for his daughter's birthday, his improperly parked car is towed away. After an attempt to dispute his parking ticket at the pound, fruitlessly arguing of the faded markings in the street, he grudgingly pays the towing fee to retrieve his car and shows up late to the birthday party, to his wife's annoyance. When he goes to pay the ticket, he tries again to dispute it, loses his temper, attacks the employee's booth and is taken away by security while the other people on the line cheer him on. His stunt makes it on the news, causing him to get fired, his wife demands a divorce and obtains full custody of their daughter. When his car is towed away once again, he finally decides to take revenge against those who ruined his life...

La Propuesta (The Proposal): Santiago, the son of a rich family drives back home after running over a pregnant woman and fleeing the scene. The accident makes the news after the woman dies, sparking a wave of outrage among the population. Mauricio, the father, calls his lawyer and together they ask his gardener to take the blame in exchange for half a million dollars. The police and the prosecutor arrives, followed by a crowd of angry protesters who start picketing before the family's house, demanding justice. The prosecutor sees through the scheme, so he has to be bribed as well. Then the lawyer ask for his share, the gardener demands an apartment on top of his and the prosecutor asks for an additional payment for bribes, to the annoyance of Mauricio who gets fed up with their increasing demands, especially as Santiago wishes to do the right thing and confess...

Hasta Que La Muerte Nos Separe (Until Death Do Us Part): In the middle of a wedding party, Romina, the bride, discovers that her husband, Ariel, has an affair with a coworker who happens to be one of the guests. She confronts him during a dance and runs away in despair. After being comforted by a kitchen worker, she swears revenge on her cheating husband and proceeds to "liven up" the party...

Not to be confused with the Bulgarian anthology of short stories by the same name.