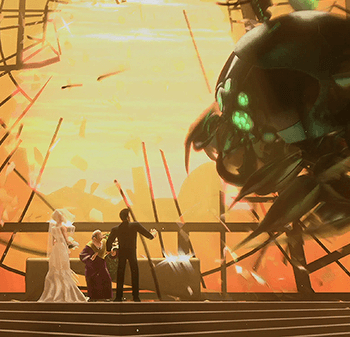 "Villains know that anyone who tries to ruin the happy ending wedding gets trounced within a few minutes so there's still time to complete the ceremony in the same episode. It's not generally worth the effort."
— Tarquin, The Order of the Stick
Advertisement:

A wedding ceremony is supposed to be a time of joy and celebration. Many, however, find it an occasion to bring up old grievances or new kidnappings. Yes, weddings can be rough in several ways, but the worst is when the ceremony becomes interrupted by a conflict of characters.

Many types of conflict can occur at a wedding, some only happen at the wedding itself, like when the guards prevent the hero from reaching the bride to make their Speak Now or Forever Hold Your Peace line. Other common reasons for a fight are Feuding Families that get provoked during the ceremony, or the wedding is being forced by a villain unto a helpless damsel.

The final result may vary. The wedding may have a happy ending anyway, it may be cancelled for the time being and resumed later (for example, if the bride is kidnapped), or it may even result in the bride or the groom giving up the whole thing. Widowed at the Wedding would be a particularly extreme result.

Sub-Trope to Ballroom Blitz, where any party gets interrupted by a fight. Sister Trope to The "Fun" in "Funeral", another sacred occasion liable to being ruined by hijinks. Compare with Prom Wrecker. Not to be confused with Themed Wedding.

Also notable as the coolest wedding ever captured on film.
Barbossa: Dearly beloved, we be gathered here today... TO NAIL YER GIZZARDS TO THE MAST, YE POXY CUR!

Before the Undertaker could marry Stephanie in a dark wedding, "Stone Cold" Steve Austin arrives and saves her from Taker and the Ministry's clutches.

Before the Undertaker could marry Stephanie in a dark wedding, "Stone Cold" Steve Austin arrives and saves her from Taker and the Ministry's clutches.